Mom Was Right, You Do Have A Halo!

Mom was right, you do have a halo ::  To be clear, this is not a post talking about a religious halo or your spiritual aura – although, that is more than likely what your mom was referring to!!  But for now, what I’m talking about is the halo that your reputation has created around you and the impact it can have on not only your current state, but more importantly your future opportunities. Why do halos matter, especially now? Simple. Halos work off of the power of association.  Make no mistake, association has power and value.  Social Media channels have created a never-before-seen level of transparency making it incredibly easy for people and brands to better understand with whom they are interested in associating. I’ve seen the power of this first-hand throughout my career in motorsports.  Our world is all about the association between drivers, teams and brands.  For many years, my sole focus was on how to build positive association between drivers and their sponsors through public relations and marketing programs – building platforms to drive association and connection with fans.  The foundation for these types of partnerships is rooted in authentically aligning brand and values attributes with the athlete, which establishes credibility in the eyes of consumers. The power of association … → 84% of employees would consider leaving their current job if offered a job by a company with an excellent reputation → 69% of job seekers would not take a job with a company that has a bad reputation – even if unemployed → 100% of your referrals are based on reputation → 100% of your employees are your reputation ambassadors We often see the halo effect at work when it comes to brand and brand ambassador relationships.  If an ambassador acts in a manner that would negatively impact the brand, because of their association, you’ll generally see the brand quickly and publicly distance or disassociate itself because of the unfavorable publicity halo and adverse business impact it would create.  Can you think of any examples of this??  Does Subway and Jared Fogle come to mind? How about Tiger Woods and Gatorade? Do you remember Michael Phelps and Kellogg after the images of Phelps using a bong were released?  Does the name Ryan Lochte ring a bell? Then there is Kate Moss and H&M when she was publicly exposed for using cocaine.  H&M was quick to sever the relationship and issued a short statement related to what kind of person should represent their brand – “If someone is going to be the face of H&M. It is important they be healthy, wholesome and sound.” In the case of Subway, it’s disassociation with Fogle was quick, to the point and delivered via Social Media channels – “We no longer have a relationship with Jared and have no further comment.” One of the most iconic examples of corporate partners racing away from an ambassador is Lance Armstrong. Shortly after his admission of doping, bullying and lying, his corporate partners dropped the once legend of bike racing. The power of the halo is a two-way street, whether it’s an individual, corporation, franchise or a university. […] 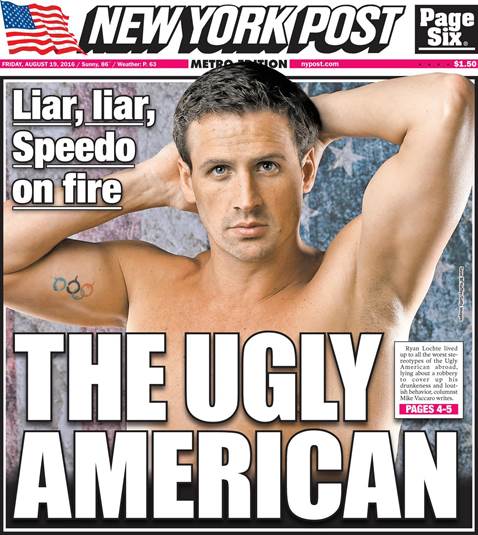 Ryan Lochte may have won gold in Rio, but he lost more when he came home to the United States. By now, we’ve seen the headlines and interviews about Lochte’s lie of being robbed with a gun held to his and fellow Olympians heads. It’s truly unfortunate, but it’s a scene that we see all too often when someone gets themselves into a situation, decides that an embellishment of the truth (or straight-up lie) will cover for their actions – all will be well! Well, not always … There’s a an old saying that goes like this, “what we do in the dark will always come to light.” As Lochte’s story unraveled, so did all four of his personal endorsement deals, which surely struck a blow that the 32-year-old swimmer hadn’t considered that late night in Brazil. It didn’t take long for Speedo, Ralph Lauren, Airweave and Gentle Hair Removal to get out of the Lochte partnership pool and dry off. Many reported the personal income loss to range from $750,000-$1,000,000. What may be worse than losing all of his personal endorsements is the damage done to his reputation. You see, Lochte still has years of earning potential as a competitive swimmer and gold medal Olympian. Now however, few brands will want to associate themselves with the type of person who will lie on a global platform while representing a nation. Are we all perfect? No and no one expects us to be – we are human. In my opinion, the disconnect occurred when Lochte parted ways with his values. Values matter, plain and simple. Values ground us and guide us through our most difficult trials in life. Clearly values such as honesty and integrity mattered to Speedo as the company statement directly called out: While we have enjoyed a winning relationship with Ryan for over a decade and he has been an important member of the Speedo team, we cannot condone behavior that is counter to the values this brand has long stood for,” Speedo, the swimwear company, said in a statement. “We appreciate his many achievements and hope he moves forward and learns from this experience. Will Lochte learn from this experience? Only time and his actions will tell. Read the full story on the New York Post.